Don’t Just Imitate, Internalize the Teachings of the +Christ 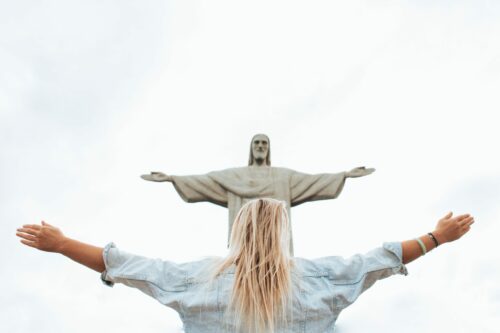 (Remember, Christ is not a last name, it is a title…)

From the baby nestled snugly in a manger, to the overly large and anglicized statues in our churches, religious images remind us our +Creator sacrificed a part of their triune +Self so we might receive +Their merciful forgiveness. Christians believe this is the result of Jesus’ life, ministry, death, and resurrection.

Today, Christians celebrate Jesus’ presence in the salvific vision by imitating the biblical lessons passed down to us after centuries of edits and redactions. Somehow, though, we’ve lost touch with Jesus’ real ministry of conversion and instead externalize or showcase our celebrations, and I’m not talking about forms of worship. I am, however, referencing the expectation that we get through the celebrations as quickly as possible while hoping to get out of the parking lot before it turns into a circus – the parking lot, not Mass. Although…

Nope! Not what this article is about. In so doing, we put Jesus on the OUTSIDE of our persons – on our sleeves, so to speak. Our hearts, then, lack that greater connection and internal transformation. But by wearing Jesus on our sleeves, we have forgotten to hold the +Christ in our hearts BEFORE engaging in whatever kind of externalization of our beliefs. In other words, we have made Jesus’ teachings conform to our agendas rather than allowing ourselves to conform to our +Christ.

It’s okay; finish your war dance. I’m aware that challenging the notion that we do not do the very thing we claim is insulting at its core. And I do apologize if it seems I am insensitive, but let’s be very real here, even if only for a little while, and unpack a bit of was just laid bare before us.

So, what just happened? I placed before you the idea that while we claim to follow Jesus’ teachings, we do so with an agenda in our hearts and minds, which then guides the various aspects of Jesus’ ministry and teachings we choose to exemplify. (Seriously, you need to stop the war dancing and listen… I promise it’s not as bad as you think…)

Having an agenda in our hearts and minds is not necessarily a bad thing. It is incredibly important for us to in some way connect with the things about which we are passionate. Our agendas keep us on task and focused on why we initially involved ourselves in ministry. Agendas are cornerstones to action. This becomes a problem when we are TOO connected with our agenda(s) that we can’t see anything else. We begin to superimpose our prejudices – in whatever form – onto others; good, bad, or indifferent.

Sadly, the same thing happens in some Christian ministries. Some pastors project their understanding of what Jesus would do in extreme situations onto people who do not share the same vision. Personal agendas overtake truth and they become riled when rebuffed or rebuked. The pastors, then, discard Jesus’ teachings of internal conversion like the baby with the bathwater.

An example of agenda-based ministry is fighting hatred against specific groups of people, whether it’s members of the LGBTQ+ community, those who ascribe to the political left, or members of ethnic communities. Most people would agree fighting intolerance and injustice is good but the ends do not justify the means. But agenda-based ministries do so by engaging in the same behavior as the haters – berating and castigating them for their actions. Fighting fire with fire only serves to burn down the entire house.

Some ministers preach it’s not okay to discriminate against any group. But they, themselves, openly discriminate against cis-gendered individuals, conservatives, and pigment-deficient individuals. They justify their actions by claiming to protect victims. In other words, their actions show it’s okay to bully the bullies. There are even a few ministries built on bullying bullies. I must have missed the part where Jesus said it was okay to use a sword to fight injustice.

Many point to Jesus upending tables in the tabernacle as justification for their behavior; that moment Jesus’ humanity overshadowed +Divinity. But Jesus didn’t engage in hatred of those people. +He never threw away those who were angry or who sinned. Jesus pointed out their misdeeds and helped them find their way back to the +Creator.

Most of Jesus’ ministry was quiet and peace-filled. +He asked people not to shout from the heavens about their healing or forgiveness. Jesus laid as low as one could who was healing the sick and bringing forgiveness to hearts.

Being a consummate teacher, Jesus exemplified the internal conversion of hearts and souls. +He taught people how to turn away from sin, suffering, and guilt, and instead gave us another option. +He taught us how to exemplify compassion, love, forgiveness, and mercy for ALL people. Jesus didn’t just heal or forgive those who were already saved. +He forgave the broken, angry, and sinners so they too could find their way back to the +Creator.

So why is it suddenly okay to do the opposite of what Jesus taught? Why is it now okay to claim to follow Jesus’ teaching, but then do the opposite? It’s not, and never has been.

Jesus invites us into a new existence – a way of BEing the very thing we claim we believe. James reflects this sentiment in his first letter to the early Christian churches.

In BEcoming a living embodiment of the +Christ’s teachings, we must first still our hearts and minds to become aware of the +Creator’s presence in our daily lives. We do so by focusing on the lessons taught so long ago – lessons on opening ourselves to the +Creator through our everyday human experiences.

First: be aware of what you’re doing. You must be willing to examine your actions, or lack thereof, with an open mind and heart. But NOT in a way that causes you to self-deprecate. It is up to each of us to put aside ego and find God in EVERY instance of our lives. Are we living the lessons to which we ascribe? Are we, then, exemplifying those same lessons? What the heck ARE we doing? Look deeply and honestly at whether or not we are practicing what we preach.

Second: Take responsibility. This doesn’t mean accepting blame for things that are not yours. It simply means you accept responsibility for your actions, behaviors, and words in everything you do, or have not done, whether good, not-so-good, or indifferent. This is also where you stop blaming others for everything thing wrong in your life. Find solutions; don’t just wield a hammer at every nail.

Third: Return to prayer; not just recitation of all things memorized, but a real conversation with the +Divine. Rote prayers have their place as meditative tools, but they should not supplant spontaneous heartfelt conversations with the +Creator.

Fourth: Convert your entire person by BEcoming an example of the teachings you espouse. This is synonymous with “Walk the Talk,” and means you do the very thing you claim.

Pfft… That Was Obvious.

Yeah, I know. What’s the old saying about hindsight? Look – imitating the +Christ is more than adhering to agenda-based select teachings. Imitating Jesus is BEcoming the whole package – again, not just select aspects. We internalize our relationship with the +Divine by becoming aware of the +Creator’s love for All of creation; not just of certain parts of it. Internalizing means we take into ourselves the very essence of +Christ’s teachings and reflect back to the world Jesus’ offer of salvation. BEcoming means we rid ourselves of those things that separate us from the +Creator.

The +Creator loves all +Created beings equally – yes, even those who sin. If the +Creator did not love everyone equally, there would have been no offering of forgiveness through the sacrifice of the +Christ. To +God – all are worth of love and forgiveness – even the most ugly among us.