The Bridge – A Parable 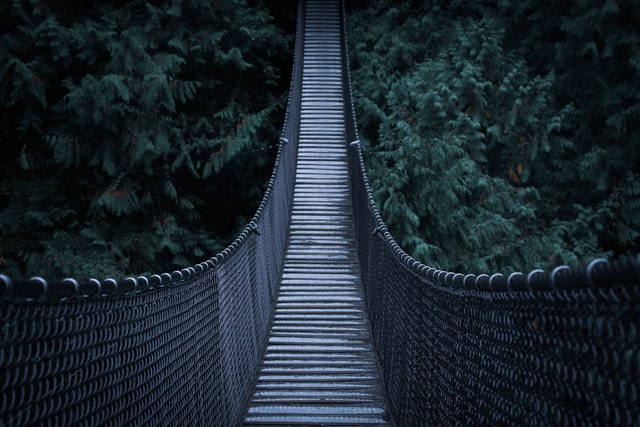 The story below is heavily modified and reprinted from Edwin H. Friedman’s Friedman’s Fables (1990, published by Guilford Publications). This story is posted with permission and is subject to copyright law and restricted from further use.

Created by Rabbi Edwin Friedman and originally called the Fable of the Bridge, it was created as a lesson in releasing codependency. However, this powerful story has another lesson about accepting the choices people make in our lives without taking on those choices as our own. It is presented here in that light – as a lesson in allowing others to make their own life choices and to allow them to accept the consequences of those decisions.

This is the story of a person who was embracing an opportunity to live the life about which they had always dreamed. One day the opportunity came and they began the journey. As the person moved towards the opportunity, they came to a bridge was between them and their goal.

After starting across the bridge, the person noticed someone coming from the opposite direction; they had about their waist a rope that if stretched out, the rope would reach a length of perhaps thirty feet. The stranger began to unwrap the rope as they got closer to the center of the bridge.

Just as the two individuals were about to meet, the stranger said, “Pardon me, would you be so kind as to hold the end of the rope for me?” The person on the journey of a lifetime agreed without a thought, reached out, and took it. The stranger beckoned that the person use two hands and hold tight.

At that point, the stranger jumped off the bridge.

The person on their journey abruptly felt a strong pull from the now-extended rope. Automatically, they held tight and was almost dragged over the side of the bridge. The person holding the rope shouted down at the stranger: “What are you trying to do?” The stranger yelled back to hold tight onto the rope without further explanation.

This is ridiculous, the person thought and they began trying to haul the stranger to the bridge, but it was beyond their strength to bring the other back to safety. Again the person yelled over the edge, “Why did you do this?” The stranger only said, “Just remember, if you let go, I will be lost.”

The person holding the rope yelled back, “But I cannot pull you up!”

This time the stranger yelled back, “I am your responsibility. If you let go, I am lost.”

He began to think about his predicament. Here he was eagerly pursuing a unique opportunity, and now he was being sidetracked for who knows how long.

Maybe I can tie the rope somewhere, he thought. He examined the bridge carefully, but there was no way to get rid of his new found burden. No matter what the person yelled down to the stranger, the answer was always the same – “Just keep hanging on, my life is in your hands.” Even after insisting that together they help the stranger climb up to safety, the stranger yelled back the same answer time and time again.

As time went by, the person became keenly aware that it was almost too late to resume his journey. If he didn’t leave immediately, he wouldn’t arrive in time.

Suddenly, the person on the bridge understood what had to be done. It was something so different and even alien to his normal way of thinking, but it had to be done. The person yelled down, “I want you to listen carefully, because I mean what I am about to say.” The person dangling below indicated they were listening.

Afraid, the stranger yelled back, “What do you mean?”

The person on the bridge responded, “What happens to you is up to you. You must decide how this situation will play out. I will become the counterweight while you do the pulling and bring yourself up, but you alone are responsible for your own life. I will even pull from here if I am able.”

As the person spoke, they unwound the rope from around their waist and braced to be a counterweight. The person was ready to help as soon as the dangling stranger began to act.

Upset, the stranger yelled back, “You cannot mean what you say, You would not be so selfish. I am your responsibility. What could be so important that you would let someone die? Do not do this to me!”

After a very long pause, the person holding on to the rope said in a slow and deliberate voice, “I accept your choice.”

In speaking those final words, the person holding the rope freed his hands and continued his journey over the bridge.

As we journey through life, it becomes increasingly easy for use to pass responsibility for our decisions or actions onto others – the “it’s not my fault” addiction that has grown over the past few decades. But the truth is, we are each responsible for our own actions and decisions in life – and likewise, we must allow others to do the same no matter the outcome.

Don’t get me wrong, we can walk beside those taking long journeys and we can help when it is prudent and right so to do, but the moment we take over responsibility and want more than they want for themselves, we remove their ability to make informed conscious decisions and take responsibility for their outcomes.

One of the hardest lessons I had to learn as a psychotherapist is that I can’t want growth and change more than the person sitting across from me. If they don’t want to move forward, they won’t. It’s that simple. In those instances, though, the person may never understand that the consequences they experience for their choices are theirs alone – no matter how much they blame the perceived external forces.

So… instead, I accept my own choice to move forward into the life I have always dreamed of living…