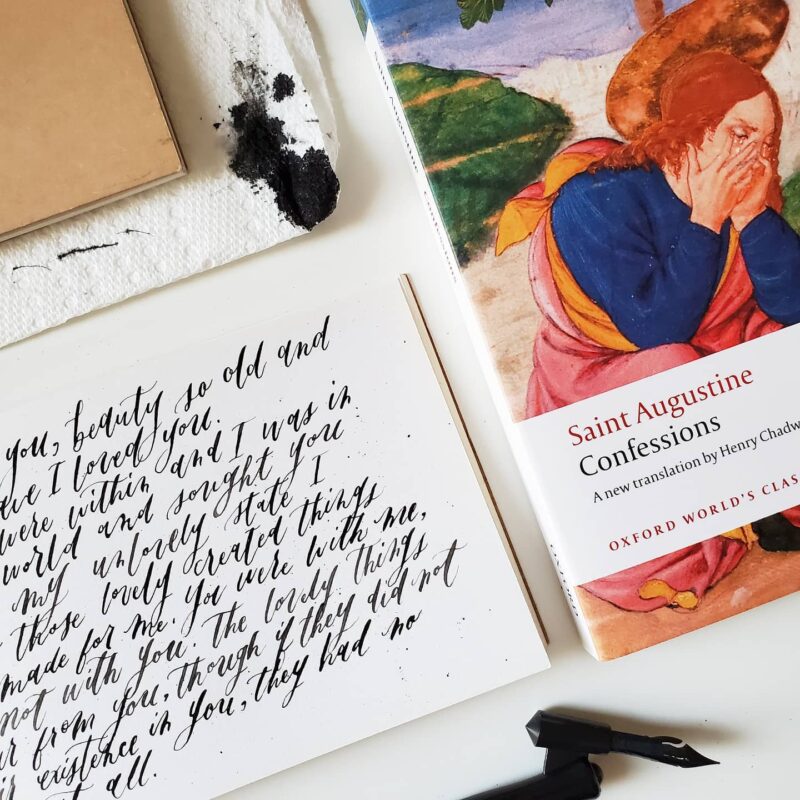 My reading list is, at the very least, eclectic. I often find inspiration in theological dissertations, scientific journals, science fiction (and fact), and even the occasional build-it magazine. There are a few, though, that transport me back to my own sacred wandering – to those times I looked away from the Divine and into the world around me to find comfort and some sort of path to the Creator – fool that I was. But I would change nothing. Those moments of running away from the very thing I sought helped me to understand the intricacies of life and to better understand the plight of all whom I encountered.

St. Augustine of Hippo is one with whom I can easily identify. Though I have maintained my Christian identity all my life, I have wandered away – again, searching for the Creator through the Created. Augustine said it perfectly in the following:

Late have I loved you, beauty so old and so new: late have I loved you. And see, you were within and I was in the external world and sought you there, and in my unlovely state I plunged into those lovely created things which you made. You were with me, and I was not with you. The lovely things kept me far from you, though if they did not have their existence in you, they had no existence at all. You called and cried out loud and shattered my deafness. You were radiant and resplendent, you put to flight my blindness. You were fragrant, and I drew in my breath and now pant after you. I tasted you, and I feel but hunger and thirst for you. You touched me, and I am set on fire to attain the peace which is yours.”

It took me so very long to love +You—my God!
+Your Beauty is timeless: it took me a long time to love +You.
But +You were within me the whole time as I looked for +You out there – in the world,
and as I was looking, I found comfort and pleasure in all the fine things +You made.
+You were always within me me, but I wasn’t aware of +You!

I focused instead on the Created Beauty, not on +You,
but it was because of +You they exist.

+YOU CALLED, and I listened; my deafness finally shattered.
+Your brilliance caught my eye and I was able to see. +Your life I breathed as if from a fragrant flower, and now I am breathless only for +You.
I tasted +You, and now I want only what +You can give me. +Your gentle touch set fire to my soul – to find my peace – in +You.

St. Augustine wrote those lines (Chapter XXVII) as a reaction to his belief concerning the danger of music and other weaknesses of the flesh to the devout Christian because of his own experiences. In his early years he lived a dissolute life and was, himself, a pagan before his own conversion. Much of his writings were, as are many of my own, reactionary. But his was a reaction based on a life he believed was apart from God. My reactions are from my quest to discover the depths of my own relationship with the Creator – to BE in the presence, always. In a sense, I have always been running TO my Creator.

My running began when I was a small child – it’s been so many years ago and it is getting more difficult to remember the finer details of that day, but I will never forget +His face, nor will I forget the last time I saw the +Man standing at the end of my bed in my grandfather’s house. I saw +Him as clearly as I see the clutter on my desk. I can still see +His smile – radiant and welcoming, uttering not a single word while simultaneously sharing tomes of wisdom. That day +He spoke only six words to me, though +His mouth never moved – always that loving smile; “You are one of my servants.” Looking back, I now realize it wasn’t so much of an invitation to follow as it was a statement of fact and for me it was no coincidence. That morning in my prayers I had chosen my path – to be a servant. Since then, however, +He has been as elusive as the +Stag in St. John’s Dark Night of the Soul; physically, at least.

As I said, that was not the first time I had seen the +Man. A couple of times I had what my parents lovingly referred to as an episode in a small church where we visited the Cristo Negro de Otatitlán. I don’t remember much of what they said about me other than I looked so completely at peace. I seem to recall my grandmother asking why no one could move me, pick me up, nor wake me from my gaze. It was as if I were a statue glued to the ground. I think they were scared there was something wrong with me. Only my grandfather understood. He stood by me and protected me from the others.

They all thought I was staring at the cross – at the little +Man hung on the big sticks. But I wasn’t looking at the cross – it was +Him. Each time I saw +Him, +He just smiled – nothing else. At times I was confused, why didn’t +He talk to me or go for walks, why didn’t +He play with me? At some point I understood +He didn’t need to – I could see it in +His eyes and feel the radiance from +His presence. Each time I smiled back with all the love I could muster and I never stopped gazing upon his face.

It’s hard to believe so many years have passed since that last time I saw +Him – physically, at least. So much has happened in the years since. I have seen my share of struggle and I’ve even caused a few of those struggles. I have always felt apart from the world while I lived within its confines – never really feeling like I fit in – sometimes really wanting to not find where I fit. And so I did a lot of running. I would run to a thing, from a thing – hell, I even just ran around in circles in a kind of holding pattern a few times. It drove me nuts, but at least it was running. I’ve also seen some incredible times. I’ve had fun, played in puddles, and experienced the wonders life has to offer – I was happy! A few times, I allowed myself to be complaisant – I was so willing to please others that I lost myself much of the time – well, if truth be told, I lost myself most of the time I was running. Now that I look back, I realize I wasn’t the one who started the race.

What was it Sophia (Golden Girls) used to say? “Picture it…” San Clemente… I was all set to enter seminary high school. I had the grants that would pay for my education, the Bishop for the Diocese of Orange County had already signed off, and my parish not only supported but encouraged my calling to the priesthood. They apparently saw things in me at which I rarely looked. But in a single moment it was all gone, not by my choosing but because of the power and control of one man – my father. He took me for a “walk” one day – something he would do from time to time but only when he had something serious he wanted to discuss. During that walk he asked me to reconsider entering the seminary. Okay, so he more told me what I was going to do than asked, but his rationale was convincing. I had been in private schools most of my life and he wanted me to experience a more public, a more secular life before I made the decision to become a priest. To this day I fully believe he knew I had already made that choice long before the walk. At that time, I only heard the words, “public high school”; the rest fell silently to the ground along with my hopes and dreams.

Despite everything, I understand why he did what he did, and I am eternally thankful for the chance to experience the fullness of life that he gave me. I experienced so much and have walked so many miles that it has given me the rare opportunity to have experienced everything for which I now minister, and I can empathize, fully, with those who are lost. My secular life was just as much a calling as is my priesthood, and I wouldn’t change a thing.

This is, of course, a greatly condensed call story. To be sure, there is much more to my story, but more important is that there is much more to my future. And it is exactly that on which I choose to focus – on the life I now live and the people I now serve. A calling to the priesthood, for me, isn’t about what others can do for me – it’s about BEing in the presence of my +Creator at all times – the good and the not-so-good. It’s about joy-filled service and fidelity to the teachings of the Christ. It’s about healing my own infirmities so that I can be a healing presence to others. And sometimes that means having to walk a very lonely path.

The thing is, we are never truly alone. All one has to do is look into that smiling face.